In January this year, the nation witnessed the worst disaster ever in the poultry industry when bird flu caused heavy losses to farmers across the country.
Premium Poultry Farms, one of the biggest farms in the Federal Capital Territory (FCT), Abuja, was the worst hit. Over 600,000 birds were reportedly wiped out, bringing the giant farm to ground zero. The farm, along with others, was sealed-off for six months by the federal government to prevent spread.
Immediately after, the farm was back to life again. A new management was put in place to resuscitate the farm and strengthen its production capacity.
Mr. Grant Shepherd is the new general manager of the automated farm with 32 years’ experience in poultry production.
The poultry expert from South Africa was brought in six months ago to breathe fresh air into the farm.
In an exclusive interview with Daily Trust in his office, Shepherd said his dream was to make the farm stronger and pass whatever knowledge he had as an expert to the workers in the farm for sustainability.
Mr. Shepherd, who studied poultry production, said the farm currently is stocked with 180,000 birds, with a second batch of 160,000 expected by October, adding that by February 2017, the farm would be in full production.
According to him, the farm, which restocked in June, would start producing eggs by October and full production by November/December this year.
While punching a calculator for the estimated number of eggs per day, he said the farm targeted 9,000 crates (about 270,000 eggs) per day when in full production by February next year.
The farms fully-automated feed mill has the capacity to produce eight tonnes per hour.
Mr. Shepherd, while sharing his vision for the farm said: “You know the bird flu completely destroyed the farm, and the chairman had to take a bank loan to resuscitate it. He is relying on me, of course, to do that for him. I am sincerely hoping to do that and turn the farm back to its normal status and beyond. I will also pass my knowledge to the staff here.”
On biosecurity, he said he took both primary and secondary factors seriously, stressing that “no person will be allowed into the premises of the farm.” 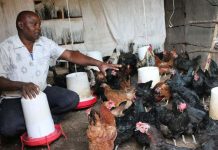