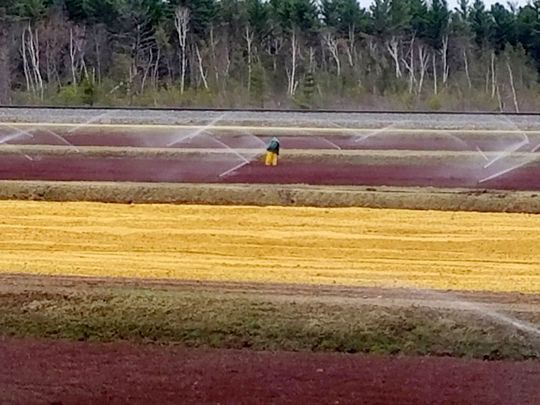 Cranberries are king in Wood County, Wisconsin, and local growers want the public to know all about this thriving industry during 2018 Wisconsin Farm Technology Days July 10-12.

Lippert said there are about 5,400 acres of cranberries and approximately 100 growers in Wood County. And according to the 2012 Census of Agriculture, the farm-gate value of Wood County cranberries is about $40 million or 40 percent of the county’s total agricultural value.

Cranmoor township west of Wisconsin Rapids is the heart of the county’s cranberry industry. Lippert said cranberries have been harvested there for more than 150 years. But today the ruby-red crop grows in more than half of Wood County townships.

Once called “crane berry” by settlers because of its blossom resembles the Sandhill Crane, the little red berry is Wisconsin’s official state fruit — and the state’s No. 1 fruit crop in both size and economic value.

Once called “crane berry” by settlers because of its blossom resembles the Sandhill Crane, the little red berry is Wisconsin’s official state fruit. (Photo: Courtesy of Andy Manis)

Lippert said cranberries – traditionally a bog crop — have moved upland. Growers now have the ability to lift water with pumps and return it to reservoirs.

At Farm Technology Days cranberry growers intend to lay to rest cranberry misnomers, Lippert said. Contrary to popular belief cranberries do not grow in water. Instead the perennial low-running vines are flooded with water to aid in harvest. When a bed is flooded, berries float to the surface where they’re corralled and harvested with equipment. The crop is also flooded in the winter and encased in ice for frost protection.

In the Marshfield Clinic Health Systems Innovation Square, a mini marsh will be constructed so show-goers can compare flooded and dry beds. Lippert said the mini marsh is modeled after Walworth County’s miniature mockup of Lake Geneva and Kewaunee County’s mini replica of Lake Michigan. The two counties hosted the show in 2016 and 2017, respectively.