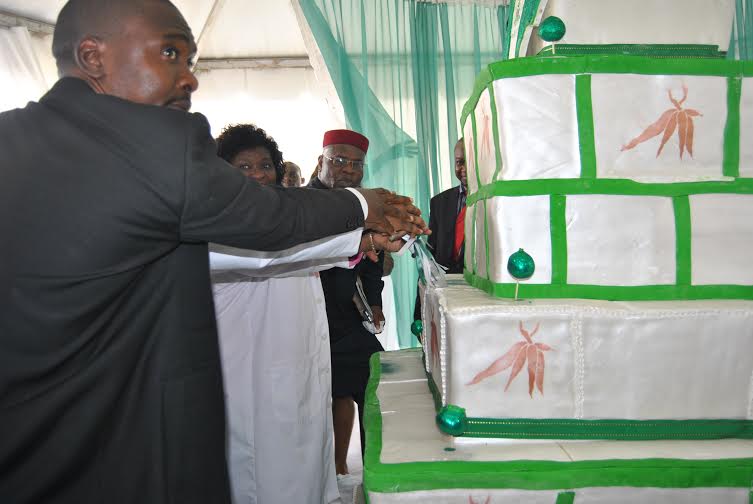 On Tuesday, October 14, 2014, the world’s largest cassava cake was unveiled at the Federal Institute of Industrial Research, Oshodi (FIIRO) by Vice-President Namadi Sambo on behalf of President Goodluck Jonathan.

Thereafter, the vice-president proceeded to cut the massive cake. With him were Grace Elemo, director-general of FIIRO; Olusegun Aganga, minister of trade and investment; and Joseph Dauda Yakwo, chief operating officer of Reesemau Concept Limited, among other dignitaries.

In this interview with TheCable, Joe Dauda explains the rationale behind the world’s largest cassava cake project initiated and promoted by his company, and gives interesting insights of what became the high point of the opening day of the 2014 FIIRO Investment and Technology Week.

TheCable: Tell us more about this cake and what it signifies.

Dauda: This cake project was conceived to add value to the centenary celebration by doing something very unique to Nigeria. Many people now know that Nigeria is the world’s largest producer of cassava. We produce over 40 million metric tonnes of cassava every year. In this our centenary year, we felt it was proper to do something that is not borrowed. Cassava is one of the things we can be proud of and there is nothing wrong with being proud of what you have. We were encouraged to do this project because of the body language of the current administration, which is very favourable to cassava. Some people now refer to the minister of agriculture as cassava minister. This is because he is working hard – together with other relevant stakeholders – to help Nigerians see the huge economic potentials in agriculture and cassava in particular. Gradually, cassava flour is becoming part of bread and there has been no negative effect as a result of this practice. At an individual level, I am neither a farmer nor am I a baker. I do not own a farm and do not own a bakery; but the potential of cassava is clear for all discerning minds to see. We initiated this project so that Nigerians will not be doubtful of the quality of Nigerian cassava. Cake is more complex than bread; by baking cake with 100% cassava, it means cassava is very stable. Sometimes, Nigerians have this irritating habit of placing more value on anything that is foreign. This is very unfortunate. By baking the world’s largest cassava cake, we are trying to put Nigerian cassava on the global map. This, we believe, will encourage export, encourage our farmers, create more jobs, and enable more investment in the crop.

TheCable: How did you come about this project? What inspired you to initiate something so huge?

Dauda: Well, as they say, it’s a long story. However, I will give you the shorter version. Although I am primarily a writing consultant, in 2010, I was invited by one Victor Oluwafemi Walsh to serve as COO for a project he conceived to add value to the golden jubilee celebrations of that year. The philosophy behind that project was simple but filled with potential to change the mood of the nation and give a welcome climax to the golden jubilee celebration. I was charged with the responsibility of working with Walsh to seek the endorsement of the Nigeria@50 secretariat for a certain countdown clock, which had already been designed and the prototype already produced by Walsh’s company, Integrated Management Resource (IMR). The initial plan was to secure this endorsement early enough for a 100-day countdown to the golden jubilee; however, due to bottlenecks with the Nigeria@50 secretariat, we were only able to secure the endorsement about 50 days before the golden jubilee.

According to our plan, the Nigeria@50 secretariat informed President Goodluck Jonathan of this countdown clock. They also facilitated his presence at the event we organised for the unveiling of this clock to Nigerians. This event was held at the state house banquet hall exactly 50 days to the golden jubilee – Wednesday, August 11, 2010. The massive 13-foot countdown clock was unveiled by the president and it did a lot to change the rather dull mood of the nation at the time. However, unknown to many Nigerians, this countdown to the golden jubilee was also simultaneously supposed to be a countdown to the unveiling of the world’s largest cake. At the time, the record for the largest cake in the world was held by a city in the United States and we wanted to beat that record by baking a 65-ton cake. Plans were in top gear but due to sponsorship issues, we were unable to achieve this feat.

You will recall that the Nigeria@50 secretariat was directly under the office of the Secretary to the Government of the Federation. Unbeknown to us, the SGF at the time (Alhaji Yayale Ahmed) had informed the president about this world’s largest cake attempt. We only got to know this when Silverbird was celebrating its 30th anniversary in 2011. During that occasion, the president said that he had been reliably informed by the SGF of a group that was attempting to bake the world’s largest cake. He said that although that project did not see the light of day, it would have been nice, and he was calling on Nigerians to do anything positive that will bring glory to Nigeria. Since that day, I have thought of ways to salvage our World’s Largest Cake project.

For two years, I did not see any national event that could provide a veritable platform for such a world record attempt. Then, 2013 came and I started hearing about the forthcoming 2014 centenary celebration. Many people I respect did not see any reason for celebrating our centenary in 2014, but I decided that this was the time to revive and attempt the World’s Largest Cake project, drawing inspiration from the words of the president. At that time, Victor Walsh was in Dubai and was a little cut off from activities here. Fortunately, with encouragement from my friend, Tony Oyewole, this project was resurrected. In fact, it was Oyewole that renewed my interest in the project, after he heard my tales about our attempt in 2010. Tony and I began to work on unveiling the World’s Largest Cake in Nigeria during the centenary celebration. But, once again, we had issues. To make matters worse, Tony lost both of his parents during this season. Things were looking bleak again and I was ready to throw in the towel. But, as they say, every disappointment is a blessing. While this period of mourning lasted and things were looking like it was all over, I got an inspiration.

Why not attempt to do the world’s largest cassava cake instead? I asked myself.

Cassava is unique to Nigeria and it will make more sense. I did some research and realised that this was possible. The person that made me certain that it was possible to bake cake with 100% cassava flour was one Okoruwa, who even does weekly training in cake-baking with cassava flour somewhere in Ibadan. Armed with this knowledge, I contacted FIIRO, and the rest, as they say, is history.

TheCable: Wow! What a long journey. I guess we can say you have succeeded at last. Can you share some experiences you had during the cake-baking process? You said you are not a baker; so, how was this mighty, gigantic cake baked?

Dauda: Well, first and foremost, the recipe for the World’s Largest Cassava Cake was developed by FIIRO. After we got that right (this took several experiments), we proceeded to set a date. The initial date was shifted due to financial issues, but when we got the green light, we decided that we were going to bake and unveil the cake during FIIRO’s Investment and Technology Week. I must add that, without the support and cooperation of the DG of FIIRO, Grace Elemo, this project would not have been possible. Under her leadership, I worked directly with Oyegbami Folake Abiola, who is the assistant chief technologist in the bakery section of FIIRO’s food department. Together with Oyegbami and  Ebunoluwa (FIIRO’s legal adviser) and Dele Oyeku (a deputy director in Techno-Entrepreneurship at FIIRO), we were able to move the project from thought to action. It wasn’t easy but, when D-day came, we had assembled a team comprised of five master bakers with requisite knowledge and experience in baking and decorating, and a volunteer team made up of about 25 volunteers. Most of these volunteers were young people, but with the never-say-die Nigerian spirit, we worked tirelessly such that by Tuesday morning, the cake had been baked, stacked, iced, and decorated, ready as a bride to be unveiled. We were expecting the president to unveil the cake but were consoled that, in his absence, he sent the vice-president.

Dauda: This is a very important question. Everything we did in this project was under the poke-nosing lenses of two video cameras. Everything was caught on tape; from the sieving of the cassava flour to the breaking of eggs, to the mixing, to the operations at the oven, to the assembly of the cake, the movement of the cake, the stacking, and the icing and decoration. We are currently editing these long hours of material to produce a video to be known as The Making of the World’s Largest Cassava Cake. It is our hope that interested organisations, bakeries, cassava flour producers, and other interested stakeholders will take advantage of this video to place one-minute adverts that will be inserted at regular intervals. We believe that, with the support of the media, this video will be well received by the Nigerian public. We are grateful to TheCable for this interview.

TheCable: How was the cake project financed?

Dauda: The official sponsor for the project is NDDC. We are still working to resolve some issues so that we can settle some obligations over the project. We believe NDDC will work with us to make everything work out smoothly. On that note, we express thanks to the chairman of the board of NDDC and the MD of NDDC and the entire management, including the director of Agriculture and the executive director of project. It was on the basis of the green light we got from NDDC that we took this dive. We believe we shall not be allowed to drown.