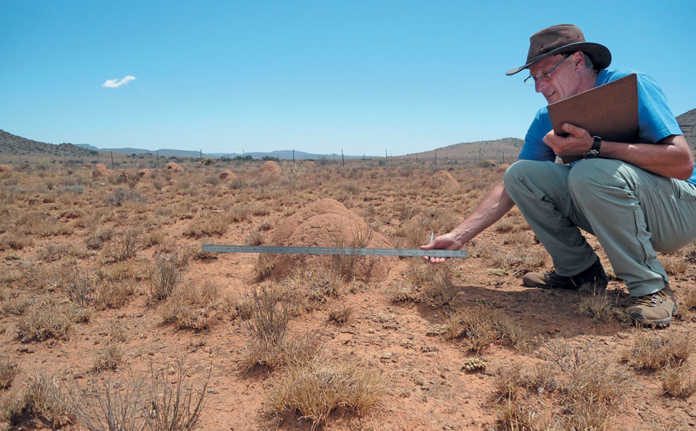 In 2016, MSc ecology student at the Vrije Universiteit Brussel in Belgium, James Hagan, and his supervisor, Dr Michael Cramer, arrived at the Grootfontein Agricultural Institute in Middelburg, Eastern Cape, to conduct research on the spatial patterns of mound-building termites.

Here they soon learnt that several local farmers had expressed concern about the surge in termite populations, and that the insects were competing with their livestock
for grazing and forage.

Moreover, the farmers also noticed that the increase in termite activity could be associated with livestock grazing activity.

It was also at Grootfontein that Hagan and Cramer were introduced to a 75-year-old grazing experiment by scientist Justin du Toit.

With this additional information, they decided to expand their study to include the impact that grazing had on termite populations, and whether the termites posed a threat to livestock producers.

Analysing the data
Hagan and Cramer spent several days surveying the termite mounds in the Karoo. However, it was only after returning to their base in Cape Town to analyse the data that they discovered that the farmers were right: grazing had indeed increased termite mound density.

“We recorded higher termite mound densities in the grazed plots than in the ungrazed plots,” says Hagan.

“It’s unlikely we would have discovered this if it hadn’t been for the fact that Grootfontein is home to some of the longest-running grazing trials in the world.”

The data also revealed other interesting and important information. Although the number of termite mounds had increased, the overall land area occupied by mounds did not differ between grazing lands.

“This indicates that livestock grazing has changed the density of termite mounds, but not the overall abundance of termites in the landscape. This means that grazing resulted in smaller mounds. However, what’s still unclear is whether these smaller mounds will continue to increase in size,” says Hagan.

While the farmers were concerned about termites competing with their livestock for forage, Hagan and Cramer concluded that if this were the case, grazing would have reduced overall termite activity.

“From our work on these experimental grazing plots, it appears that termites are unlikely to pose a risk to livestock productivity, apart from reducing access to grazing by occupying space in the landscape,” says Hagan.

Contrary to general negative perceptions of termites in agro-ecosystems, this research concurs with recent evidence that termites have a positive effect on these systems as they recycle dead plant and faecal matter, which improves soil properties.

This is particularly important in arid systems where bacterial and fungal activity is limited. Studies conducted in Western Australia showed that termite activity improved soil nitrogen and water infiltration, which led to notable increases in overall wheat yield.

It has also been shown that livestock often prefer to graze around large termite mounds
as the soil there is generally more fertile than that of adjacent soils. This may indicate improved grazing quality.

In South Africa, experimental evidence suggests that the protein and nitrogen content of red grass (Themeda triandra) growing on and around snouter harvester termite mounds is higher than that of the same grass growing on adjacent soils.

This suggests that termite activity may enhance overall plant productivity, and can provide areas of higher quality forage for livestock.

“While farmers’ observations of a link between grazing and termite mound density are correct, our research presents no evidence that termites compete with livestock for forage.

In fact, termite activity is likely to be positive for soil condition.

“However, if termite mounds continue to grow, and we don’t know if this is the case, it could, in the long run, reduce accessibility to grazing,” Hagan says.