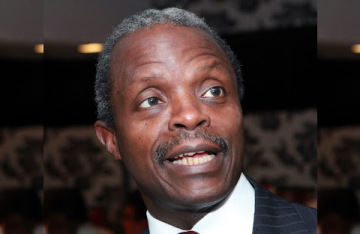 In its effort to develop Nigerian agriculture, the Vice President Yemi Osinbajo has said that the federal government is set to train 100,000 persons as agricultural extension workers as a way of providing support services in agricultural technologies to farmers.

The vice president stated this in his address at the official launch and public presentation of the Agriculture Promotion Policy (APP) tagged the’ Green Alternative’ in Abuja yesterday.

According to him “The number of persons to be trained will be gotten from  the 500,000 teachers currently being  recruited  by the federal government”.

He said, “The problem in agriculture sector has never been a lack of policy but the focus and capacity to stick with the plan to modify where necessary but to stick to the plan  and ensure also  that the plan aligns with all aspects of the economic brand of the  government.”

“This particular issue of alignment is crucial. For example, you cannot have a policy of encouraging local production of food and on the other hand have a high tariff on agricultural imported equipment  there is no way that we can encourage local  production when we allow unbridled importation of the same things that we are trying to produce”, he noted.

He added that “There is no way we can do the scale of agricultural production both for  domestic consumption and export without ensuring improved  local seedling  development alongside  those that we import and of course encouraging the work of the  agencies of the Ministry of Science and Technology who have been making great breakthroughs in local development of agricultural equipment.”

The vice president posited that major hindrance to  the development of the agriculture sector is finance where double digits interest rates  charged on loans is nearly impossible for any farmer to meet.

“Financing of agriculture is also a crucial policy with double digit interest rate at the moment, and the almost religious reluctance by banks to lend to agriculture. We must develop some funding avenues in the short term. The Ministry of Finance has practically concluded plans to capitalise and re-engineer the Bank of Agriculture. We expect that before the end of this quarter, the bank should be ready to give single digit interest rate loans to farmers,” he said.

Also giving the Keynote address, the Minister of Agriculture and Rural Development, Chief Audu Ogbeh said a key target of the Agricultural Promotion Policy (2016-2020) is aimed at doubling agricultural household incomes in 6- 12 years.

He said the Green Alternative Promotion Policy has five major strategic thrusts including achievement of self-sufficiency and sustainable food security, reduction in import dependence and economic losses, stimulation of agro exports for enhance foreign earnings, enhancement of wealth and job creation as well as achievement of economic diversification to make the economy less oil dependent

According to Ogbeh the “Green Alternative “ Has three pillars, the first pillar is Productivity Enhancement, comprising nine key components namely access to land, soil fertility, access to information and knowledge, inputs, production management, storage and processing, marketing and trade, consumption and nutrition. The second pillar is crowding in private sector investment entailing greater access to finance, promoting agribusiness and investment development while the third pillar is Institutional Strengthening of the Ministry with its parastatals and agencies

“Some of the key targets that we are seeking  to achieve within the plan period and beyond as quick wins under the three pillars include growing the agricultural sector annually between 6%-12%, doubling agricultural household incomes 6-12 years, integrating agricultural commodity value chains into broader supply chain and driving job growth  and wealth creation” he said

“In this policy, you will see us navigating through the agricultural terrain, trucking on virtually every aspect” he said the APP touched on the human element.  Reflecting on years of agricultural neglect where agriculture was seen as the refuge for the wretched, touched on land use, soil types and correct use of fertilisers for maximum yield” he said Adding that we dealt with seed, quality and availability, extension, research as well as irrigation among others.

Ogbeh maintained that “the essence on Green was to capture the essence, spirit and orientation of the new policy document. The emphasis on Green is deliberate, to underscore not only the imperative of building a strong, vibrant and resilient economy, but also a green refreshing, transformative agriculture led economy”

He added that “It is to ensure mutual complimentary between efficient, effective and productive agricultural production, systems and processes, without causing further harm or and environmental sustainability, especially mitigating the effects of climate change to enable the habitat continue to support or eco system”

The Minister who asserted that government is a continuum, stated the need to build on the foundation inherited from the previous administration

Speaking on the successes of the administration, he it included the  drive to achieving self-sufficiency being on course, commitment to all year round agriculture through increased investment, reactivation of the extension system as well as working tirelessly to bring an end to the incessant  conflicts between herdsmen and farmers.