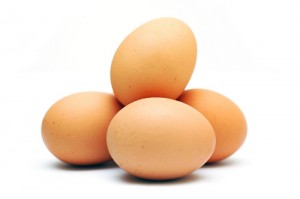 One of the innovations that heralded the just concluded agricultural conference held at the International Conference Centre, Abuja, is the egg powder produced by one of the farms from Atoyo, Ijebu, Ogun State.
Although the egg powder technology is commonly found in Europe, the U.S. and other developed nations, it is a new technology in the Nigerian poultry industry.

Mr Samuel Sewoniku is the Business Manager, Answer Industries Limited, an agricultural development company that developed the Karakara Egg Powder.
He said that the egg powder is produced in three categories-the whole egg, egg yolk and egg white.
According to him, unlike the raw egg that can only last for 25 -30 days, the egg powder can last for minimum of one year.
The business manager said that the idea to diversify into powder eggs came as a result of egg glut which they experienced several years back. “There was a time we were producing a lot of eggs and we could not even get where to sell them,” he said.
“We threw away a lot of eggs and some sold on credit, and we could not recover our money. This made us to think about having egg powder plant.”
The company uses imported ‘spray-drying technology’ (the same technology for turning liquid milk into powder) to produce the products.
The egg shell, which is a source of calcium, is used for poultry feed products and floating fish feeds.
Sewoniku pointed out that no part of the egg was a wasted.
“This is the first of its kind in this country, though it has been in use in developed countries,” he said. “I want to tell you that everyone that has come into contact with these products loves it. Everywhere we go with these products, people appreciate it.”
He said that the products can be used for baking, confectioneries, cake and fried items beside many other uses, adding that industrial users also appreciate the product.