Thank you. The minister has said it all, that in the last 10 years no water project was commissioned despite the federal government’s support for water projects in the country. It is most unfortunate that the Federal Ministry of Water Resources has been involved in too many projects at the same time and instead of seeing to their completion, they kept adding more projects to the extent that they couldn’t commission any in the last 10 years.

owever, we now have a round peg in a round hole. With the honorable minister himself an engineer, he understands the importance of bringing a project to conclusion on time. To do this, he has commissioned technical audit of all the projects and they have been inspected. Currently, we are trying to finalize the report that has been submitted by the technical consultant that went round all the states to inspect the projects. This is to enable us know the current status of the projects and then, we will now prioritise them.

You have worked with the urban water sector, what do you think is actually wrong with the water system in Nigeria?
The problems are in many dimensions; number one, we have the problem of inadequate investment in the urban water sector. If you go to many states, you will discover that the schemes that are serving the urban areas were built since pre-independence. So many of them are over 50 years old. Most of the pipes in most cities are AC pipes and today nobody uses AC pipes. So all the schemes are obsolete and there has not been gradual improvement of the schemes over the years.
Also, successive governments at the state level have not been making the investment that they are supposed to in the urban water sector and this has contributed tremendously in inadequate water supply in all the urban areas. This has forced many households into self-help by drilling their own boreholes and wells to enable them get water.
The ministry is poised to reposition the Niger Basin Development Authority to encourage food production in the country and your department is part of this. How are you going to key into this effort?
Well, the River Basin Development Authorities, 12 of them, over the years, have not been performing optimally for so many reasons, but I believe the current administration is poised to bring back their lost glory. It is set to make them the focus of rural development in the country and getting them to contribute substantially to food security. Government will make them improve our hydro power and contribute to our aquaculture, that means growing fishes in Nigeria. But which is the best way to go? The first way is to see how we can commercialize them. First of all, we have to make them run like an agency that will generate its own revenue and then meet its own cost. We have to give them that orientation. Nobody is thinking of the assets that these authorities have. Billions of cubic metres of water are lying fallow in many dams. The hydro power potentials in all the dams have not been tapped; a lot of vast agricultural land is not being used, why, because everybody is busy waiting for the money that is coming from the budget. But now we are changing their orientation.
The honourable minister, at the beginning of the year, set up a committee to revitalize the river basin authorities. Now he has again inaugurated the national steering committee for commercializing the river basin authorities and I am fortunate to be part of the committee. We are to come up with the guidelines that will assist them to commercialize their activities. 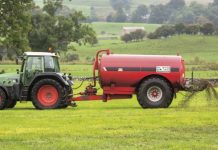 8 new rules for water and what they mean for farmers