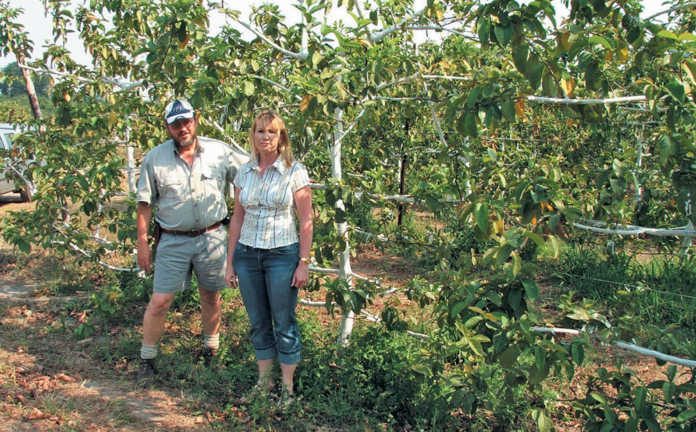 Although the guava industry in South Africa was established in the Western Cape in the early 1900s, and in Limpopo and Mpumalanga in 1938, little progress has been made in terms of cultivar improvement and production techniques.

According to independent production consultant, Chris Smith, almost all the guava plantings in the Western Cape, which accounts for about 65% of the country’s total production, are of the Fan Retief cultivar.

Unlike most commercial fruit cultivars nowadays, which are produced by dedicated cultivar development programmes, Fan Retief was created through farmers’ selections and informal propagation methods over the years.

In 1994, the Agricultural Research Council’s (ARC) Institute for Tropical and Subtropical Crops (ITSC) released an improved cultivar, the TSG2. This has fewer pips and is significantly larger than the Fan Retief fruit (134g versus 96g). However, it never took off in the Western Cape due to the Fan Retief’s higher yield, says Smith.

The TSG2 is currently the only cultivar tolerant of the Malalane strain of guava wilt disease (caused by Nalanthamala psidii), but is susceptible to the other two strains, namely Nelspruit and Levubu, which are devastating production in Mpumalanga.

Moreover, ITSC trials have found that guava wilt disease can be transferred through a graft, so using tolerant rootstocks is not an option. The only solution at this stage is to breed resistant or tolerant cultivars, says Smith.

New varieties
In 2016, the Western Cape Department of Agriculture made R300 000 available to stimulate the guava industry through the development of new cultivars.

The money will be used to identify promising new cultivars, establish a gene bank to expand the ITSC guava breeding programme to the Western Cape, and find ways to improve profitability through increased production per unit, Smith told the Guava Producers’ Association AGM held in Wellington recently.

Some 28 promising new varieties have already been selected from the ITSC guava breeding programme, managed by Salomie Willemse and Christo Human. They were planted at the ARC’s Bien Donné Research Farm near Simondium at the beginning of the year.

The ITSC has found some of these varieties to be superior to Fan Retief in terms of internal colour, seed-to-flesh ratio, and fruit size. The Bien Donné trial seeks to confirm if the plants will thrive in the Western Cape.

“It’s still too early to form any conclusions on how the selections will perform under the production conditions of the Western Cape, but they’re off to a good start,” says Smith.
An additional 21 varieties will be planted towards the end of the year.

According to the ITSC evaluations, one of these has a white flesh, low seed content, good internal colour, and produces fruit with an average mass of 143g. It also has a higher sugar content (16,3 Brix).

“The market demand for white-fleshed fruit is uncertain at the moment, but it’s a good idea to evaluate this cultivar and then save it in the gene bank,” says Smith.

Should white-flesh guavas become more popular, the industry will then have access to such a variety.

To further improve breeding efficiency, the ideal would be to split breeding progenies generated by the ITSC at Mbombela and plant some of the material in the Western Cape.

In this way, selecting new varieties adapted to local climatic conditions would become quicker and easier. However, it is illegal to bring plant material into the Western Cape because of the risk of guava wilt disease spreading to the province.

For this reason, a local gene bank will be created to make nucleus plant material more accessible to Western Cape farmers. In addition to duplicating the existing ITSC gene bank, it will include local guava strains.

This is important, explains Smith, as farmers in the province have been trying to reduce the risk of guava wilt disease infection by propagating their own plant material from trees
on their own or neighbouring farms.

This has resulted in a variation in trees, as the resulting plant material is not always true to type. According to Smith, he has visited Fan Retief orchards where some of the trees do not resemble the characteristics of the cultivar.

“We desperately need to establish mother blocks in the Western Cape and do DNA tests to confirm the authenticity of plant material,” he says.

In addition, the South African Plant Improvement Organisation (SAPO), which provides quarantine and nuclease facilities for the pome, stone fruit and table grape industries, could be used to supply the same service to the guava industry.

Trellising
Turning to improving production efficiency, Smith says that the ITSC has experimented with various trellising systems at Mbombela, but the results have not been promising.

However, methods of fine-tuning these systems, and in effect improving production results, have been found. Four systems are currently due to be evaluated at the Bien Donné site: Palmet, V-Haag, Closed Vase and the traditional Open Vase system.

“By using alternate bearing systems, we hope to increase production by between 30% and 60%, based on the system employed and the number of trees planted per hectare,” explains Smith.

Planting density can vary between 500 trees/ha and 800 trees/ ha and might even be more, depending on the success of the Bien Donné trials.

It is hoped that the new systems will improve production in terms of land used and labour.

“At the moment, most of the trees are grown at a ratio of 5m by 4m, and trees become extremely broad and dense as they grow older, so that tractors can’t always be used inside the orchards,” says Smith.

“Pickers, meanwhile, waste a great deal of time as they have to walk in and out of orchards to empty baskets.

“Pest and disease control under such conditions is also problematic and, in severe cases, sometimes has to be done by hand.”

Amortising the cost
The cost of using alternative systems and the impact of the higher production per hectare will be investigated to help farmers calculate the return on investment. Guava trees have a far longer lifespan and in general are kept considerably longer – for up to 40 years – than pome or stone-fruit trees.

“It’s worth investing money to improve orchard access and mechanisation in the long term and to ultimately increase profitability,” says Smith.

While the wheel of research usually takes long to turn and yield results that can be implemented on the farm level, Smith estimates that if growing conditions are kept at an optimal level, they will be ready with preliminary results within the next three to four years.

He is optimistic that these results will help to take the South African guava industry to a new level of competitiveness.

How to Plant Guava Tree