Bitter tasting ingredients can lead to pigs having a lower feed acceptability. These components could even trigger satiety signals, which in turn decrease feed intake and compromise animal performance.

The first four are identified by a small number and types of taste receptors, whereas the latter is identified by a large number of bitter taste receptors from the T2R family (15 known in pigs). Bitterness is the most sensitive and complex of the tastes and is innately associated with an unpleasant and aversive sensation. It acts as a central warning signal to protect animals against the ingestion of potentially harmful substances, such as toxic secondary metabolites that are commonly produced by plants to deter its consumption.

Some plant-derived ingredients used as raw materials in commercial feeds may contain non-toxic bitter compounds, such as anti-nutritional factors, that have been reported to decrease feed intake. In addition, certain commonly used phytogenic and pharmaceutical additives (see Table 1) containing a wide range of compounds with beneficial effects (e.g., improving enzymatic activity in the gut, showing anti-oxidant, anti-inflammatory or antimicrobial effects) can also trigger bitter taste receptors and cause behavioural aversions to feed.

In an experimental model where piglets were already adapted to solid feed (21 days after weaning), the inclusion of common bitter additives in diets resulted in a fast reduction (about 8%) in feed intake. An even worse feed acceptability would be expected in critical periods, such as weaning.

Table 1 – Bitter components in feed and their impact on feed intake.*

Can bitter compounds be avoided?

The complete avoidance of bitter compounds in pig feeds is particularly challenging because of the high prevalence and diversity of bitter tastants (ligands binding to a taste receptor), and the variability in bitter taste receptors. This is further complicated by:

Bitter compounds present in commercial feed decrease feed intake and, consequently, growth performance. One possible solution is to allow pigs to adapt to bitter compounds, but this takes time (see Figure 2) and usually involves a high risk of weight loss. Alternatively, it is possible to minimise the inclusion of bitter compounds in feeds. 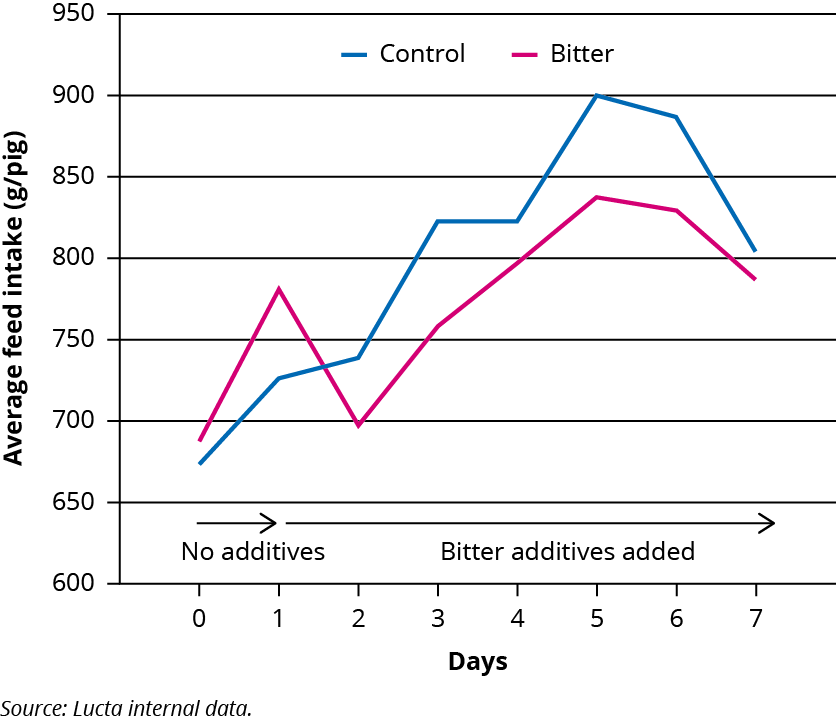 However, due to the dynamic nature of commercial feed formulation, driven by market price fluctuation and ingredient availability, and the great complexity of bitter taste sensing, this strategy is extremely time-consuming, expensive, and has a limited success rate. It is, therefore, critical to find alternative solutions that allow a quick response to reduce bitterness perception and maximise feed acceptability.

ABOUT US
Agriculture Business gives deep and insight information on agriculture business, providing information on funding opportunities for small, medium and large agriculture enterprises while providing online presence and marketing platform to boost their business.
FOLLOW US
© www.agribusinessinfo.com