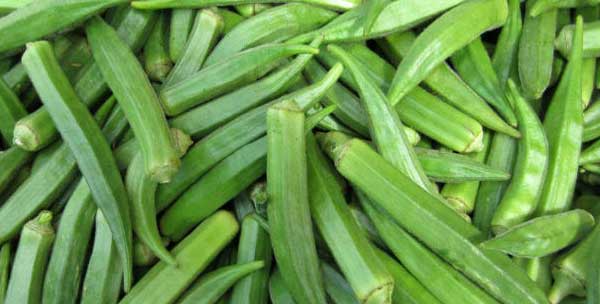 Okra is a very popular and nutritious vegetable farmed and consumed by many people across the country, but some Nigerian farmers hardly see okra farming as big business.
However, those who engage in the venture have a lot of success stories to tell.

They say, “you don’t just make money by farming okra, but by knowing the secrets of okra farming and following them diligently.”
One of the okra farmers in Nasarawa State, Mrs. Esther Audu, who spoke with our reporter, maintained that for one to reap bountifully and make gains from okra farming, the farmer must first and foremost plant on a very fertile soil in a good location, particularly flat land.
“After getting a good location, the next thing is to go for improved okra seeds. The variety I plant, matures in 40 days. I plant twice in the rainy season and once in the dry season,” the farmer disclosed.
She said once an okra farmer has chosen the right location and the right variety, the next thing to do is to keep to time and carry out good crop management practices.
“The best thing to do is to plant on ridges because it makes the soil more available to the plants, but okra also performs very well if planted on flat soil. I plant on tilled flat soil and I am getting good yield,” Mrs. Audu said.
According to her, an okra farmer should be very observant to detect if the soil he or she plants on is already fertile, so as to avoid waste of money by applying fertilizers that the crops don’t even need.
“Mere looking at this soil you know is rich, so I don’t apply fertilizer, not even manure, but the crops are flourishing. But if you must apply fertilizer, apply the right type at the required dosage, and at the right time as well,” she stressed.
The farmer said she weeds the farm manually when she notices that weeds have come up to a level that they will compete for nutrients with the crops, adding that, “You must also keep pests away when the need arises.”
According to the okra farmer, who also intercrops the farm with maize, she harvests the okra at four days interval lasting for about one month before starting a new farm.
When asked to quantify the gain she makes from okra farming, she simply told our reporter: “We eat it at home and I sell to buyers to make money, which I use to supplement home needs. So, it’s profitable.”
She noted that the major challenges she faces are lack of access to land and capital to expand the farm.
Another okra farmer, Mr. Paul Oko, who agreed with the position of his colleague, said contrary to the thinking of people that okra farming is ‘petty’ business; there is so much money in it if one does it well.